Once a patient decides to proceed with ACL reconstruction, he/she must then choose which graft to use to recreate the new ligament. Several options exist including:

Autologous tendon grafts (autografts) are portions of tendon taken from around the knee that is used to reconstruct the ACL. Recall that ligaments connect bone to bone but tendons connect muscle to bone. ACL surgery takes advantage of the body’s ability to incorporate tendon tissue into the anatomic ACL attachments and convert it to healthy ligament tissue over time (typically 12-18 months). The body completes this transformation somewhat more reliably using autologous tissue. For this reason, many surgeons still consider this type of reconstruction as the “gold standard.” However, as mentioned elsewhere, in many athletic populations the outcome of surgery is no different using autografts or allografts. 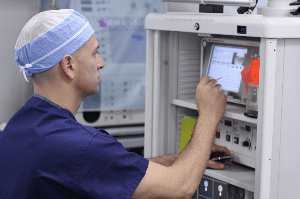 The most common choices for autograft tissue include:

Patellar Tendon Autograft
During this procedure, the middle third of the patellar (kneecap) tendon is removed from the patient along with a bone plug from the patella and a bone plug from the tibia (shin bone). Often call BTB (“bone tendon bone”), this is the only site on the body that offers bone on both ends of the graft. This is considered advantageous because it has historically been easier to securely fix the bone plugs in place during ACL surgery.

Patellar BTB has long been considered the “gold standard” choice due to fixation advantages and the clinical success rates with return to sports. However, the superiority of this graft has always been controversial because of increased risks and side effects from the harvest procedure. More patients who choose patellar BTB tend to complain of long-term knee stiffness, pain with kneeling and generalized soreness around the patella with sports. In addition, patients who try to return to sports, especially contact sports, too early risk patella fracture as the bone itself is temporarily weakened from the harvest.

Hamstring Tendon Autograft
The hamstring tendon autograft is created by harvesting two of the tendons (gracilis and semitendinosis) on the inner side of the knee, creating a quadrupled tendon graft (two tendons folded in half to make four strands). Although the hamstring tendons come from the back of the thigh, only a small incision over the front of the knee is necessary to harvest these two tendons. It has been shown that these tendons at least partially grow back (“lizard tail phenomenon”) and there are several other hamstring tendons, so patients almost never have any functional loss or residual symptoms from this procedure.

There are no bone blocks harvested with hamstring tendons and so fixation strength has been discussed as a possible drawback. However, in recent years technology has progressed to the point that the strength of fixation, rate of graft healing and return to sports for hamstring tendon and BTB grafts are nearly identical. It should also be noted that a subset of patients do have chronic patellar soreness after hamstring ACL reconstruction as well, though this is less common that with BTB harvest.

Quadriceps Tendon Autograft
The quadriceps tendon can be considered a hybrid autograft as one side has a bone plug but the other does not. This graft includes bone from the top of the patella along with quadriceps tendon. The graft itself possesses excellent strength and stiffness, similar to BTB and hamstring. Fixation of the quadriceps tendon is typically excellent with the bone block and the patients seem to experience less anterior knee pain than with patellar BTB.

Historically, this graft was predominantly utilized during revision (repeat) ACL reconstruction after another graft failed. However, there is currently momentum to use the quad tendon as a primary graft choice in place of BTB and hamstring.

For patients who are undergoing ACL reconstructive surgery, there are a number of options available to determine which graft is best for their unique needs. Dr. Millstein has extensive experience with all graft types and helps patients decide which type of graft is best based on their own preferences and goals.

Next, learn about allografts.