The knee joint (knee anatomy) is the largest joint in the body, consisting of an extensive network of bones, ligaments, and muscles. It is an extremely complex joint with many components, which means it is important to understand the anatomy of it in order to properly treat a variety of common injuries.

Knee anatomy – the main movements occur between the femur, patella, and tibia. The patella lies in an indention at the lower end of the femur, while the fibula lies at the outer surface of the tibia. 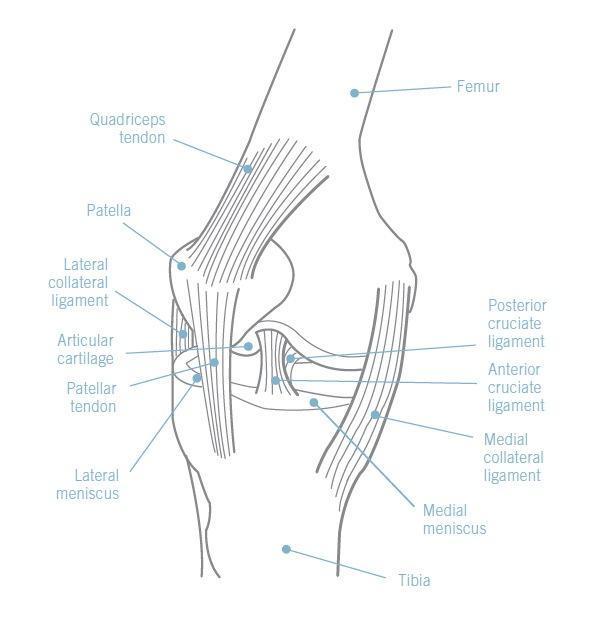 *Front view of the knee

The knee joint capsule is a thick structure that surrounds the entire knee. Inside the capsule is a specialized membrane (synovial membrane) which provides nourishment to all the surrounding structures. The surrounding ligaments strengthen the capsule, while the infrapatellar fat pad and bursa cushion and protect the knee from exterior forces.

The ligaments are extremely important to the stability of the knee, and each ligament has a particular function in helping to maintain optimal knee stability in a variety of different positions.

Medial Collateral Ligament (MCL) – Runs between the inner surfaces of the femur and the tibia. It resists forces acting from the outer surface of the knee.

Anterior Cruciate Ligament (ACL) – These ligaments form a cross in the middle of the knee joint, and travel from the anterior of the tibia to the posterior of the femur. It is one of the most important structures in the knee and prevents the tibia from moving forward.

Each knee joint has two crescent-shaped cartilage menisci, located on the inner and outer edges of the upper surface of the tibia bone. They act as shock absorbers for the knee, while at the same time allowing for correct weight distribution between the tibia and the femur. 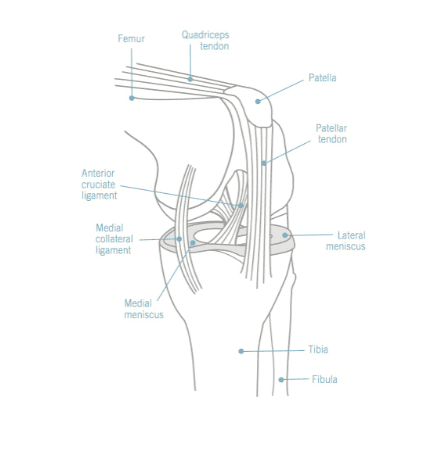 *Side view of the knee

If you would like to know more about the knee anatomy, schedule a consultation with orthopedic expert Dr. Millstein today.