The knee joint is made up of three bones and a variety of ligaments. The femur (thigh bone), tibia (shin bone), and the patella (knee cap) all form the moving parts of the knee. The fibula, which is the smaller bone alongside the tibia, serves as an attachment point for several important knee ligaments and muscles. Several different muscles and ligaments help control the motion of the knee and protect it from damage. These moving parts allow the knee to bend and move.

The medial and lateral collateral ligaments stabilize the knee from side-to-side, allowing the knee to hinge into flexion (bent position) and extension (straightened position). The weight-bearing surfaces of the knee are covered with a layer of protective cartilage. There are also “shock absorbers” on either side of the knee joint between the cartilage held in the femur and the tibia. These shock absorbers are formally named the medial meniscus and the lateral meniscus. These are horseshoe shaped and help to both center the knee joint during activity and minimize the stress on articular cartilage.

The ACL checks extension and hyperextension of the knee. It also guides rotation of the knee along with the PCL. The combination of the menisci and surface cartilage in your knee makes for a frictionless gliding surface. Please click here to learn more about the knee.

What is the ACL? 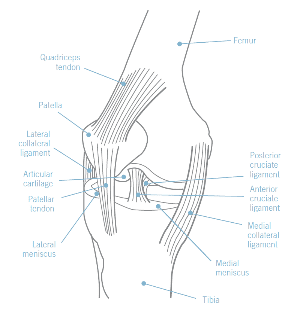 The ligaments within the knee minimize wear and tear on the knee’s cartilage. One of the most common knee injuries is an anterior cruciate ligament sprain or tear. Athletes who participate in high-demand sports like soccer, football, and basketball are more likely to injure their anterior cruciate ligaments. These sports tend to force athletes to make movements that put their knees in twisting motions while changing direction, landing from jumps, or coming in contact with other players.