ACL Tear in Adolescents and Teens


The anterior cruciate ligament is one of four ligaments that maintains the stability of the knee while participating in sports or exercising (please click here to learn more about this hinge joint). While the biomechanics of an ACL injury is the same for people of all ages, historical data suggests that the condition must be treated very differently in children and teens who are still growing. 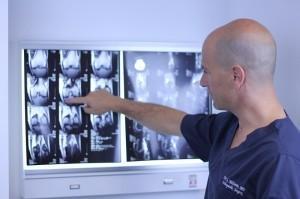 The two other ligaments — the ACL (anterior cruciate ligament) and the PCL (posterior cruciate ligament) — cross each other in the center of the knee and keep the shinbone attached to the thighbone. The ACL connects the front part of the shinbone to the back part of the thighbone. If this hinge joint is forced into an unusual position, the ligaments in the knee may tear. Tears can be partial or complete, and they often occur in children when they perform the following actions:

These motions can happen many times in an active child’s life. Skiing, bicycling, and other physical activities can cause children to tear their anterior cruciate ligament.

Sports that require a lot of pivoting, jumping, and quick starts and stops also predispose young athletes to knee injuries. These are sports like basketball, volleyball, and soccer. Children also have a tendency to stumble and fall or run into other children while playing sports and games.

Treating an Anterior Cruciate Ligament Tear in Children
The biomechanics of an anterior cruciate ligament tear may be the same as in adults, but these injuries can be more difficult to treat in children. There are growth plates on a child’s bones above and below this hinge joint. Surgeons have learned that they must avoid these sensitive growth plates when performing surgery in younger athletes in order to minimize the risk of growth disturbance. Traumatic or even surgical injury to the growth plates can result in leg length difference or “knock knee” appearance as the (pre)teen continues to grow.

Tears in children are becoming more common as children increase their involvement in competitive sports. Up until about the age of twelve, children are at higher risk for breaking a bone than tearing a ligament itself due to their biological makeup.

Additionally, teenage girls are more likely to tear their anterior cruciate ligament than boys of the same age. Physicians and scientists have considered many reasons that girls are five to seven times more likely to tear the ACL, including: anatomy, muscle strength, hormonal differences, or coordination. This has led to research in the difference in biomechanics between girls and boys as well as the development of injury prevention programs.

How is an ACL Tear Diagnosed in Children and Teens?
A physical examination of the knee is an important part in diagnosing a ligament tear in the knee. Kids cannot always express exactly what their symptoms are or answer medical-based questions. Children need to feel relaxed and be able to cooperate during a medical exam.

The Lachman test is performed with the hinge joint bent at 30 degrees. The doctor then pulls on the tibia gently to check the motion of the forward leg in relationship to the lower leg. A patient with a torn ACL will have a significantly greater forward motion without a firm stop to the motion. The patient will experience a loss of restraint of the forward movement of the tibia. The same test will be performed with the knee bent at 90 degrees. This is called the anterior drawer test.

Diagnostic imaging (x-rays and MRIs) are typically used to give the doctor an image of all parts of the hinge joint. Because the meniscus is frequently torn at the same time as the ACL, these imaging tests allow doctors and physicians to fully understand the extent of a patient’s knee injury.

Treatment for a Knee Injury in Children

Immediately after an ACL injury, patients should ice the area to prevent inflammation and control swelling. Elevation is also a big part of controlling and reducing swelling. Knee braces can also be used shortly after the injury. The brace limits the motion of the knee to put the joint at rest.

ACL rehabilitation exercises are designed to restore muscle strength and the range of motion of this hinge joint. Weight should only be borne on the knee after the swelling around the knee decreases. Extending the knee’s range of motion is important in preventing muscle tightness and stiffness.

ACL Reconstruction Surgery
Surgical treatment of a torn anterior cruciate ligament is often a very important step in the treatment of children and teens. Surgery is almost always necessary in order to prevent future problems such as arthritis, additional damage to the meniscus, and problems with knee and leg function.

Next, read about ACL and Gender.