Everyone is familiar with the garden variety sprains that include the ACL, PCL and MCL, yet there is another sprain that cannot go unnoticed — the lateral collateral ligament (LCL) sprain. The lateral collateral ligament sprain is a little less known but it is just as important. When this ligament is sprained, it most likely means that other structures in the knee are also damaged. 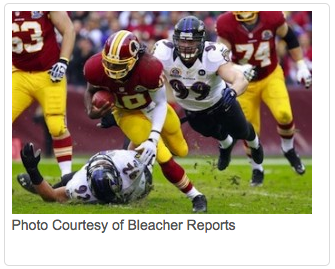 What is the LCL?

Athletes who participate in direct contact sports, like football or soccer, are more likely to injure their collateral ligaments. Due to the complex anatomy of the knee, if you injure your LCL, you usually injure other structures in the joint as well.

LCL injuries are graded on a scale of I to III:

Recently, Robert Griffin III (RG3), rookie quarterback for the Washington Redskins, sustained a sprained LCL. He missed one game to let his knee recover and then returned to play three more games while wearing a bulky knee brace, his mobility clearly hindered. This past weekend, he re-injured his knee in what would be the final game of the season. On two separate plays, Griffin’s knee buckled sideways while attempting to pivot, resulting in a torn LCL and ACL. Due to the severity of the ligament tears in his knee, RG3 had to undergo surgical reconstruction and several months of rehabilitation.

Once a physical examination/history, x-rays and MRIs are completed by Dr. Millstein, treatment of Grade I and II LCL tears can usually be accomplished with simple steps, including:

However, when a more serious LCL sprain is involved such as a Grade III injury, surgical intervention may be necessary in order to repair and restore function. After Dr. Millstein examines your LCL injury, he will recommend the best treatment plan for you.

Returning to Activity After an LCL Injury

The speed in which you can return to your normal activity level varies. Once your range of motion returns and you can walk without a limp, Dr. Millstein may allow functional progression. It is a process. As it relates to sports activities, Dr. Millstein may suggest a knee brace during sports activities, depending on the severity of your sprain. Individuals who wish to return to high-level athletics, such as RG3, may undergo more rigorous physical therapy to ensure strength and stability in the knee. The most important thing is to give your knee adequate time to heal. The knee is the largest and one of the most complex joints in the body. Because so much of our ability to move depends on the knee, it is worth giving knee injuries the proper amount of healing time.

Dr. Millstein is a Beverly Hills board certified orthopedic surgeon who specializes in knee, shoulder and sports medicine injuries. He is also a leading expert in advanced arthroscopic techniques for knee and shoulder surgery. To learn more about lateral collateral ligaments sprains or to Schedule An Initial Consultation, contact Dr. Millstein at (310) 595-1030.